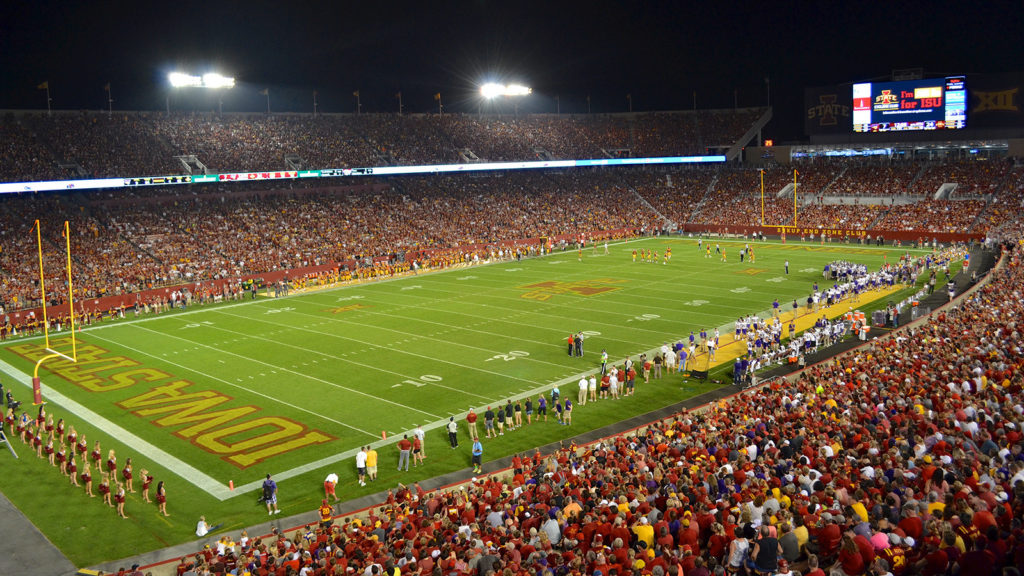 Jack Trice Stadium was originally named Cyclone Stadium and formerly Jack Trice Field. This wonderful football stadium is located in Ames, Iowa, United States. Needless to say to fans, this is the home field of the Iowa State Cyclones since its opening.

Additionally, the stadium is the third-largest stadium by capacity in the Big 12 Conference and also the third-newest in the conference. Including hillside seats in the corners of the stadium, the facility’s official capacity is 61,500. The current record for single-game attendance, 61,500. This record was set on September 5, 2015, when the Cyclones defeated the University of Northern Iowa 31-7.

From its groundbreaking ceremony that took place on Oct. 26, 1973, to the first game, a victory over Air Force on Sept. 20, 1975, Jack Trice Stadium was completed in less than two years. Originally, the stadium only had a capacity of 42,500. The construction of Jack Trice Stadium was to replace Clyde Williams Field, which had been in use from 1914 through 1974.

In 1975, the stadium’s playing field was named in honor of Jack Trice, Iowa State’s first African American athlete. On October 6, 1923, Trice and his Iowa State College teammates played against rival University of Minnesota in Minneapolis, Minnesota. During the second play of the game, Trice’s collarbone was broken but he insisted that he was all right and returned to the game. In the third quarter, Trice attempted to tackle a University of Minnesota ball carrier by throwing a roll block, he was trampled by three Minnesota players in the process. Although he claimed to be fine, Trice was removed from the game by his coach and was sent to a Minneapolis hospital. The doctors declared him fit to travel and he returned by train to Ames with his teammates. Sadly, on October 8, 1923, Trice passed away. The coronary report shows the cause of death to be hemorrhaged lungs and internal bleeding as a result of the injuries sustained during the game. He was the school’s first athlete to die of injuries sustained during a Cyclone athletic competition. As a result of his death, ISU did not renew their contract to play against Minnesota until 1989.

Jack Trice Stadium was known as Cyclone Stadium up till 1997. Due to persistent requests by the students, the facility was renamed Jack Trice Stadium. It became the only stadium in Division I FBS named for an African American individual.

The stadium consists of double-decked grandstands along the length of both sidelines and the entire south end zone. The Richard O. Jacobson Athletic Building which is an athletic center was built in 1996 and is located in the north end zone. Additionally, the field itself is slightly lower than the surrounding ground. There is a single main concourse for each of the grandstands. In 1997, A three-level press box on the west side of the stadium was added to the stadium for a cost of $6.2 million. Permanent lighting and a large video/scoreboard behind the bleachers in the south end zone were added in 2002.

On May 1, 2008, planning and fundraising for the Jack Trice Expansion project was given the green light from the Iowa Board of Regents to continue. On November 25, 2013, an announcement was made that the Reiman family would donate $25 million to help complete the south end-zone project estimated at $60 million.

On a call-in show, ISU athletic director stated that more facility improvements will be continuing over the next few years. Iowa State’s head football coach Paul Rhoads also made similar comments about upgrades. The $20.6 million Bergstrom football complex, a state-of-the-art training facility was built between the indoor practice facility and the Jacobson building with opening and dedication in 2012.

Ticket Policies:
Find out more about our ticket guarantee and other ticket policies.

Sign up for our newsletter and get $5 off your first order!
You will also recieve a monthly “What’s On Guide” to your email!